In an era where cryptocurrencies are gaining more and more ground, it is in developing countries that they are making tremendous inroads. El Salvador, for example, even made Bitcoin an official currency of the country last September. The statistics are startling: according to a study conducted in 2021 by the firm Chainalysis on the level of adoption of cryptocurrencies in the world, only one developed country, the United States, is in the top 20. With Vietnam and India in the lead, as well as six African countries in this ranking, we can therefore see a fairly clear trend emerging. A confirmed theory that some have called hyperbitcoinization. 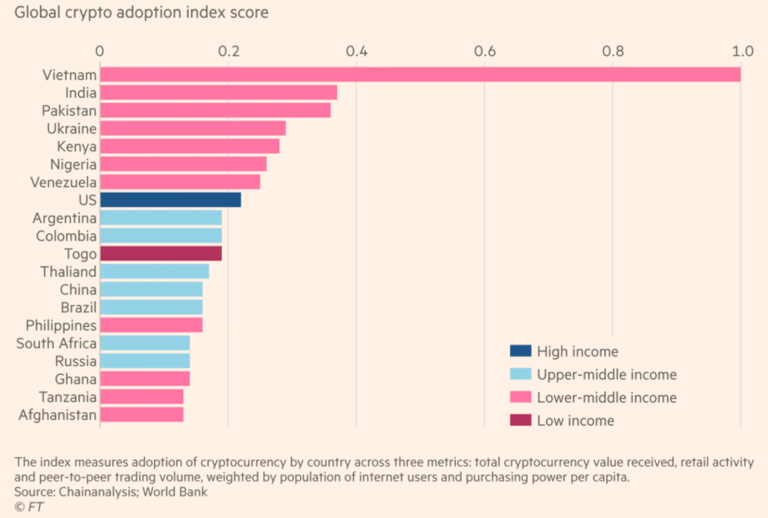 It is a term that was originally defined in 2014 by the research director of the Satochi Nakamoto Institute, Daniel Krawisz as “a voluntary transition” from a weaker currency to a stronger one, namely, Bitcoin. Today we see it as a phenomenon that is spreading in the “frontier countries”, which designate those countries with emerging economies. They see in this digital asset a kind of vitamin, a support, to the often precarious system of these markets. Therefore, there is a more considerable adoption of these cryptocurrencies among individuals in these countries. By adoption, we mean the volume of peer-to-peer (P2P) exchange without necessarily taking into account the value of these transactions. The reasons for this popularity differ depending on the economic, social and political context of the concerned regions.

The case of Latin American countries

What unites the South American nations in their choice to turn to digital assets, mainly Bitcoin, is the context of crisis there. Venezuela, for example, has suffered in recent years a profound economic and political instability. Indeed, inflation was such that the value of the bolivar had fallen by more than 2500% compared to its rate in 2017. The authorities even seized safe-haven assets such as gold and silver. Faced with such a situation, the population has quickly turned to Bitcoin, which although volatile, was still safer than the local currency and allowed to preserve a semblance of capital. It was also a way for the population to easily obtain the US dollar and other currencies to which the government had restricted access. Similarly, Argentina has faced inflation that has caused the Argentine peso to fall more than 50% against the U.S. dollar in 2018.

If we look at the more specific case of Colombia, we could attribute the rise in popularity of Bitcoin in the country to the fact that it greatly facilitates transactions related to illegal trade especially drug trafficking, a major problem in the region. Because these transactions are difficult to trace by government institutions, cryptocurrency exchange platforms are therefore conducive to criminal activities and certainly help to consolidate the foundations of the underground economy that is very present in these southern countries.

The Case of Sub-Saharan Africa

The continent has experienced significant growth in the digital asset market over the past year, with the highest number of P2P transactions in several weeks. This sudden popularity, especially in Nigeria and Kenya, is explained first by the lack of banking infrastructure leading to the financial exclusion of citizens, and then by the democratization of Internet and cell phone access in the territory. In fact, in rural areas, banking institutions and financial services are non-existent and when they are offered, they remain rather rudimentary. This means that a portion of the population does not have a bank account and is therefore deprived of access to the financial space. This is even more problematic for small businesses that do not have a bank account, as they cannot participate in global trade. They are also deprived of financing and therefore of opportunities that could lead to technological innovation that would ultimately develop a local economy. 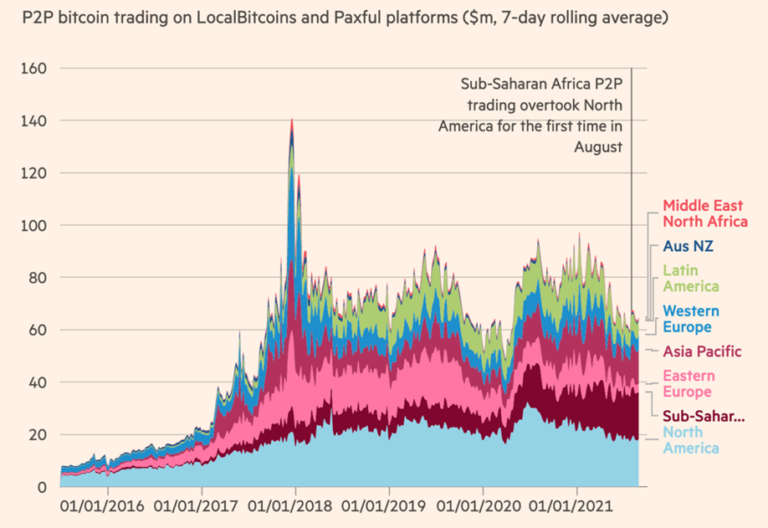 Faced with such a context, cryptocurrencies have emerged as an alternative to overcome the deficiencies of the financial system. First of all, they optimize the process of currency conversion in regions where liquidity is scarce, which usually requires converting to USD or Euro before changing to the desired currency. Not only are transactions with digital assets faster, but they are also much less expensive since traditionally the fees for sending funds to another country can be as high as 15%. In addition, the Bitcoin wallet can serve as a bank account for daily transactions and even savings. As for small businesses, Bitcoin allows them to participate in international trade by receiving payments in cryptocurrencies and thus, avoid traditional e-commerce platforms that require setting up a vendor account through a bank.

The case of Southeast Asia

As far as Southeast Asian countries are concerned, particularly Vietnam, the same reasons mentioned above justify their popularity. The lack of confidence in the country’s official currency, the Dong, which has fluctuated significantly since World War II, combined with a population naturally inclined to new technologies, has contributed to a significant level of adoption in the country.

Although digital assets are not considered currencies per se because they are highly volatile and therefore not a guarantee of value, they remain, compared to weaker currencies, a better way to protect oneself from inflation and exchange rate fluctuations. In addition, they support the economy by facilitating transactions and contributing to the financial inclusion of the population. Where the West still wonders about cryptocurrencies, emerging markets have already appropriated them into their daily lives not necessarily as a way to make huge gains, but rather to support their already precarious financial ecosystem.

Hankin, A. (2018) This is where cryptocurrencies are actually making a difference in the world. https://www.marketwatch.com/story/this-is-where-cryptocurrencies-are-actually-making-a-difference-in-the-world-2018-10-03

Economy: A period of hyperinflation imminent?