The impact of the pandemic on the electric car industry

The pandemic has hit all economic sectors hard. The car industry is no different. With vehicle showrooms closed completely until April 13, the industry will undoubtedly struggle to recover. According to some, the situation might persist for several months or even years.

Interest rates and the consequent economic volatility are known to have a significant impact on the car industry. An automobile purchase, like a home purchase, is extremely sensitive to the cost of capital and almost always necessitates financing. Consumer intentions, consumer spending, and the soundness of the economy are all indicators of auto sales.

Sales in the first two months of 2020 were partly in 2019, when no one could have imagined COVID-19 and everything that would follow. Thankfully, automakers, who are key actors in the Canadian manufacturing business, have learned from the financial crisis of 2008. They appear to be safe from the “rainy day,” at least for the time being. Some of their cash will be utilized to help the sector’s supply base and lessen the pandemic’s impact.

To begin with, most businesses have made worker health and safety a top priority in resuming operations. Automakers, suppliers, and other industry participants worked together to get the sector back on track as production gradually resumed. Masks and other personal protective equipment, temperature controls, increased line spacing, and, in rare circumstances, physical barriers have all been implemented by companies. Reduced or staggered shifts have begun to be implemented in many plants. Many industry leaders, like Aptiv, Magna, Ford, General Motors, and Lear, have also issued manuals and restart processes that their suppliers must follow.

In order to adapt to the new realities of plant architecture, companies are looking for other forms of automation for particular elements of the vehicles that lend themselves to it. To date, these businesses have implemented a variety of interim actions to help maintain margins. However, we expect that these one-time costs will become permanent in the future, resulting in a more competitive cost structure.

The automotive business is extremely international. It’s been fascinating to observe the pandemic’s impacts unfold in North America as it advanced. Automakers and suppliers were initially concerned about supply chain interruptions as a result of the COVID-19 outbreak, particularly with parts coming from China and possibly other Asian countries.

Plants in North America and Europe were consequently shut down as output in China began to pick up due to the country’s economic recovery. There were some supply chain problems around the world during this time. Even now, as North American production ramps up, a few temporary closures have been reported, sometimes due to confirmed cases of plant infection. The other temporary closures, on the other hand, were triggered by supply chains that operated in various areas of the pandemic curve or in separate locations with differing protocols. Mexico, for example, is not at the same degree of development as the United States, but it is the source of numerous automobile parts. Because this is a “just-in-time” sector, each of these temporary shutdowns has an influence on the supply chain. Manufacturers can’t produce automobiles with only 90% of the parts. As a result, orders for the remaining parts are halted, even if those parts aren’t necessarily the ones that are late. 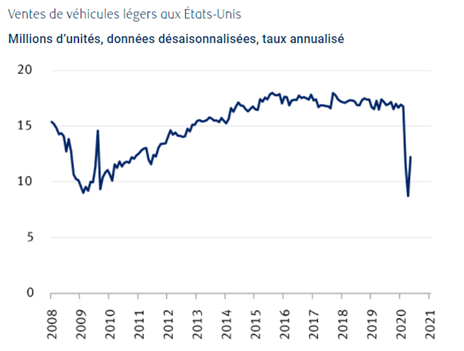 U.S. auto sales rose 40 percent month-over-month in May, prompting manufacturers to accelerate their production plans for June and July.

Keeping your composure in the stock market during uncertain times