All our banks are the same: they are adapting to the technological era by taking example from the corporate giants that rule our reality. Unsurprisingly, the most valuable object in this new digital age is data and these financial institutions are quickly realizing that they are sitting on the most valuable gold, financial data such as transaction histories. Open Banking will allow for the reallocation of data ownership to the user before it’s too late.

What is Open Banking?

Open Banking was first implemented in Europe with the entry into force of the PSD2 directive in 2018. This directive, obliging banking players to share data accumulated on a certain customer with other services when required by this customer, allows a fair and open access to the payment market. Open Banking has thus turned the European banking industry upside down by allowing the emergence of a multitude of financial technology (Fin Tech) companies, such as Lydia, a mobile payment service, and Bankin’, an application grouping and managing all the bank accounts – from potentially distinct institutions – of a user under a single application.

From a technical point of view, this concept consists in allowing the transfer of banking data via APIs (Application Programming Interfaces). Thanks to these APIs, the sharing of financial data is done securely, without having to share the username and password associated with the bank to a certain service. Thus, the user is protected from unauthorized transactions, fraud and data theft. In order to use an application conceptualized by a Fin Tech, the user will have to, for example:

For the benefit of the Canadian banking industry, this service is not yet available in Canada. Moreover, Canada does not have a system that guarantees the sharing of financial data safely. However, some Fin Tech companies currently offer applications that allow users to view all their accounts in one place, but they use a process called screen scraping. This process consists of sharing the username and password of the bank with the application so that it can connect to the bank and copy the data displayed on the screen. Banks prohibit this process and therefore no longer guarantee protection against unauthorized transactions. The user becomes responsible for any loss. In order to remedy this situation, a committee has been working for a few years to evaluate the possibility of a Canadian version of Open Banking and has, to date, dictated the different steps to be followed to achieve this. The first phase would be the design and implementation of an open banking system and the second phase would be the evolution and ongoing administration of that system. This committee also recommended a target date for the deployment of the first phase (January 2023). This date is not official, however, and remains only a recommendation.

Open Banking in Canada could take several forms, the first being the open data scenario. This form consists of allowing a service, which is not the bank itself, to view the account transactions. This service then allows multiple accounts from several banks to be viewed in a single application and offers advice on managing these accounts. The second scenario, called open process, allows a third-party payment platform to make payments on behalf of the bank. The user can then go through a third-party application to make payments via the various accounts he or she has, regardless of the bank. One example is the French application Lydia. The third and final scenario is the open product that allows the consumer to transfer their accounts from one bank to another in a simple way. For example, the user could go to Bank B to transfer an account from Bank A. In this scenario, the user does not need to go to Bank A to have the funds transferred and the account at Bank A closed. 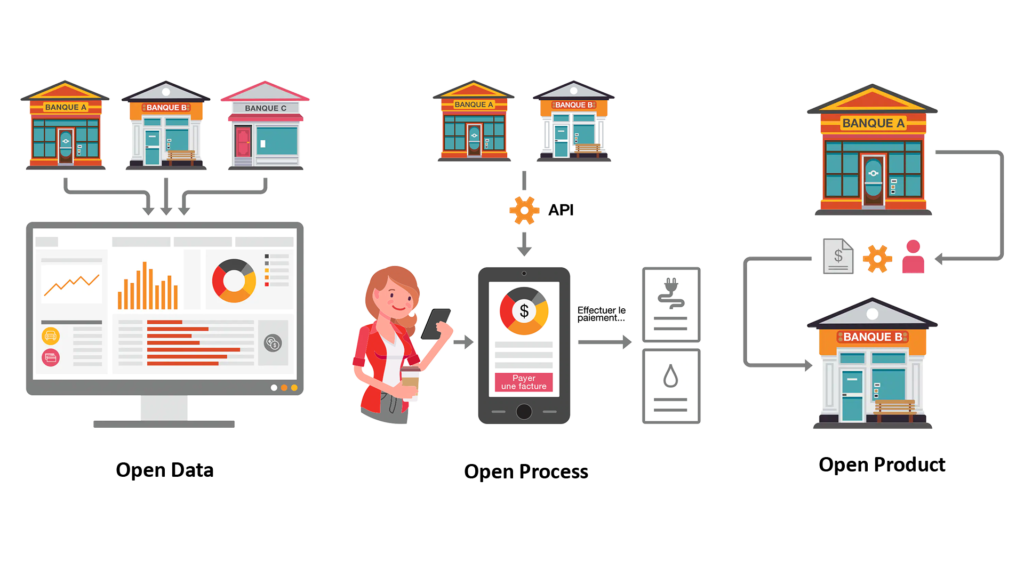 Figure : PWC, What does an open banking system mean for Canadian banks?

And the Banks in all of this?

Canadian banks will first need to choose the partnership model they will have with Fin Tech, and then select the parts of the user experience they are willing to let go. To do this, banks will need to select the new role they wish to play. There are four main roles available to them in the Open Banking era:

The risks of Open Banking

However, Open Banking does not come without risks. Identity verification and fraud prevention related to the new system are the most important issues banks will have to face. With the new APIs being exposed to the internet, cybersecurity risks will only increase for financial institutions, who have an interest in protecting these real gold mines from hackers.

Moreover, if Open Banking becomes a requirement, some banks may have difficulty introducing the new APIs system in time and may suffer heavy financial losses and serious reputation damage.

By asking banks to share the financial data of users in a consensual manner, we can hope for a decentralization of the digital and financial monopoly. Indeed, for the Canadian banking system, Open Banking could represent an opportunity to diversify financial products by increasing competition in the payment and banking sector.

Back to normal in the real estate market … not as fast as we think!

Tax havens, a secret not so secret…